Shop online from 14th to 16th February 2020 without any shipping costs. Greetings from Valentin.

»Free shipping from 50€ - Due to the current situation, delivery delays may occasionally occur!« 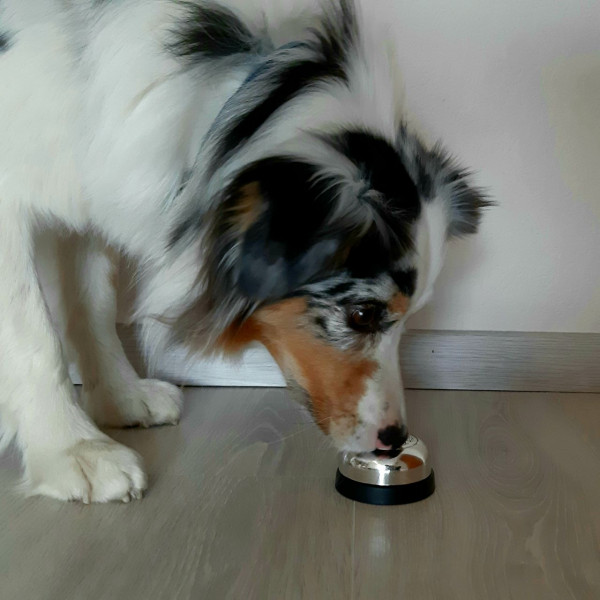 Last week we asked ourselves the question what trick training is actually good for and found out that practicing tricks is not only fun but also has many great side effects.

This week we'll get down to business and explain a few basics of trick training and the structure of the trick »ringing« in more detail.

So what does it take to get to the desired goal when practicing tricks? What can you do to make the result as sustainable as possible and most importantly, to make sure that both sides enjoy the training?

If you would like to practice ringing the bell with your paw, you should also consider whether it should be the right or the left paw.

The more exactly one has a picture in front of one's eyes, how it should look like in the end, the better one finally knows when practicing whether one wants to reward an action of the dog and which partial steps one can choose on the way to the goal.

Once you have thought about how the exercise should look exactly, you divide it into as many small steps as possible. So you can build up an exercise in small steps. This leads to the fact that the dog will probably learn it much faster in the end than if you want to proceed in large steps. In addition, the error rate is kept low in this way, which certainly leads to the fact that the fun factor is and remains high on both sides.

Also the choice of the right reward is important, because reward means motivation. A reward should be adapted to the situation and be of high quality for the dog.

With our current trick, the »ringing«, food is very well suited as a reward. It may be something that the dog really likes. In the beginning it makes sense to take very high-quality food rewards, such as cheese or a treat that is not available every day. Gradually, the quality of the reward can then be reduced to a »normal« treat.

Now we have already prepared some things, so the training can start. One last question we should ask ourselves though. The question of how long a training session should last. This is not completely unimportant, because of course you want to make progress. But you should not train too long, otherwise even a dog will not be receptive at some point. According to our experience, quite short units of 1-3 minutes training are particularly sustainable. Here it is a good idea to set a timer to the desired training time. In this way you have a reminder when you should take a break and can prevent the dog from being overtaxed. For example, you could train three times for 2 minutes each and take a 1-minute break between the individual training sequences.

But now it really starts!

We would now like to explain two different ways of how to build up the trick »ringing«.

Variation 1: Ringing with the paw

For this variation we use another trick at the beginning, which the dog should already be able to do: the »give paw«. You place the dog in front of you, take the bell in your hand so that it is in the middle of the palm of your hand and hold out your hand as if you were just letting the dog's paw be in your hand. The reward is when the dog touches the bell while giving the paw. This is practised until the dog hits the bell on the hand with certainty. Then you begin to lower the hand holding the bell centimetre by centimetre. You can, for example, hold it 2 cm lower in the first step. In this position you let the dog ring the bell five times. If it has worked without any mistakes in at least four of these five attempts, lower the hand again by 2 cm. If it has worked less than 4 times, leave the hand at the same height for the next 5 attempts and then check again that it has worked at least 4 times without error. In this way you lower the hand with the bell bit by bit down to the floor. Now you start to pull the hand away in centimetre steps until the bell is on the floor and the hand does not have to be near you anymore.

Variation 2: Ringing with the nose

The ringing with the nose we build up a little differently. Here the dog will only get help from us if we choose the right position of the bell at the beginning and if we reward correct behaviour. Therefore it is very important to concentrate on yourself, to pay attention and above all to think carefully about what you want to reward. During the training itself, you should remain calm so that you do not distract the dog by movements, talking or similar. The dog sits or stands in the starting position again before us. Treats should be prepared so that you can take one very quickly and give it to the dog. At the beginning we hold the bell behind the back. When you are ready for practice, take the bell out from behind your back and hold it tilted forward at the height of the dog's nose so that the bell button points directly at the dog. The dog will now probably look what it is and move its nose towards the bell. This is immediately rewarded. Now you just keep the bell at the height of the dog's nose and wait. Every movement of the dog's nose in the direction of the bell will be rewarded. If the dog shows very little behaviour at the beginning and sits in front of you just waiting, you can take the hand with the bell behind your back again after a while, wait a short time and hold it forward again at the height of the dog's nose. If the dog moves its nose quite safely in that direction, you only reward it when it moves its nose exactly towards the button of the bell or even touches it. If the dog always touches the bell button exactly, you start to lower the bell step by step to the ground. This is done in the same way as it is done when the dog rings the bell with his paw. Here it is only particularly important to proceed really very small steps. If the bell is lowered too quickly, the dog may tend to take the paw. This would be a sign that one should continue to practice in smaller steps.

We hope you enjoy trying and practicing and would be very pleased if you tell us a little bit about your training in the comments!

If you would like to practice more tricks or if you are interested in topics like line handling or call back, please have a look at our next online courses!

Best regards from Katja and Dana

»Free shipping from 50€ - Due to the current situation, delivery delays may occasionally occur!« 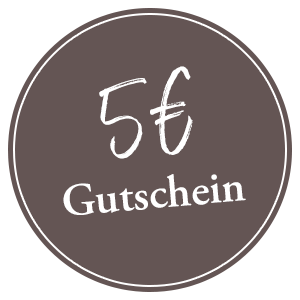 Consent to register a customer account and to use your customer data:

I hereby consent to House of Pet Design GmbH ("Responsible Party") storing the data collected in the scope of the registration process as well as any information voluntarily entered into my customer account at a later date and processing it according to the Data Protection Policy available at https://www.wirliebenhunter.de/en/privacy-policy. The Responsible Parties may, to the extent explained in greater detail in the Data Protection Policy, in particular save further information on my orders placed using my customer account and my settlement preferences, on information I may provide to the Responsible Parties on direct request or in connection with surveys regarding my person or my pet, as well as use-related data, such as returns made by me, information on the number and content of reviews submitted by me as well as the number and type of my orders saved on my customer account. Data provided in the scope of the registration and added later may be stored and used beyond the winding-up of the agreement and until revocation for the purposes explained in detail in the Data Protection Policy, in particular in order to open an individual customer account for me for the use of the online shop, to satisfy my requests and to send me account related and use related information, for statistical purposes to improve user-friendliness and to expand the service, in order to present me with special product offers directed at my interests, e.g. in that advertisements are tailored to suit my specific interests (interest-related advertising) or that I am informed, using the contact details provided by me (e.g. email, post, telephone), about product offers and new products from the HUNTER brand and where applicable products of other brands which correspond to my interests or my previous ordering behaviour or for participation in surveys and competitions on the subject of pets. To the extent that I submit product reviews via my customer account, these can be published together with my chosen username and the date of the review, for all website visitors to see. I am aware that I can revoke my consent to House of Pet GmbH at any time, effective from that point forward, without this affecting the lawfulness of the processing prior to the revocation. The link contained in the declaration refers to the statements in this respect in points 1 - 3 of the Data Protection Policy.