Free shipping costs for orders over 50,-€ (within Germany) 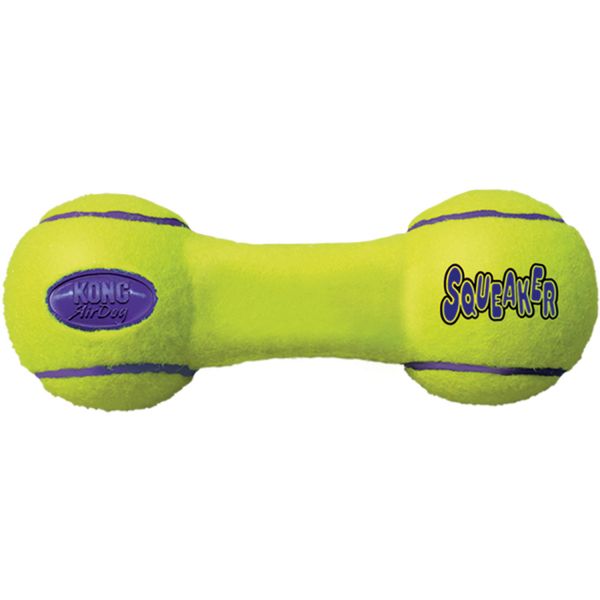 Dogs love tennis balls because they are easy to throw (by humans) and retrieve (by dogs). With the KONG® AirDog® Squeaker Dumbbell, the tennis ball as a dog toy has been expanded even further and additionally equipped with a squeaker. The dumbbell-shaped toy in tennis ball look can be thrown just as well as a tennis ball. However, the KONG® AirDog® Squeaker Dumbbell bounces unpredictably after impact, making it even more exciting than a tennis ball, because bouncing is a real challenge for the dog. But once he has found the toy, the bone shape makes it easy for him to pick up and carry. The built-in squeaker encourages the dog to chew and play with the toy a lot. So it offers a lot of entertainment and play fun. The surface of the KONG® AirDog® Squeaker Dumbbell looks just like a tennis ball, but it is made of a special material that is gentler on teeth and gums than the felt surface of a real tennis ball. Note: Please never leave the pet unattended while playing. No toy is indestructible. To prevent injuries, the toy should be checked regularly for damage or loose parts and replaced if necessary.

Free shipping costs for orders over 50,-€ (within Germany)